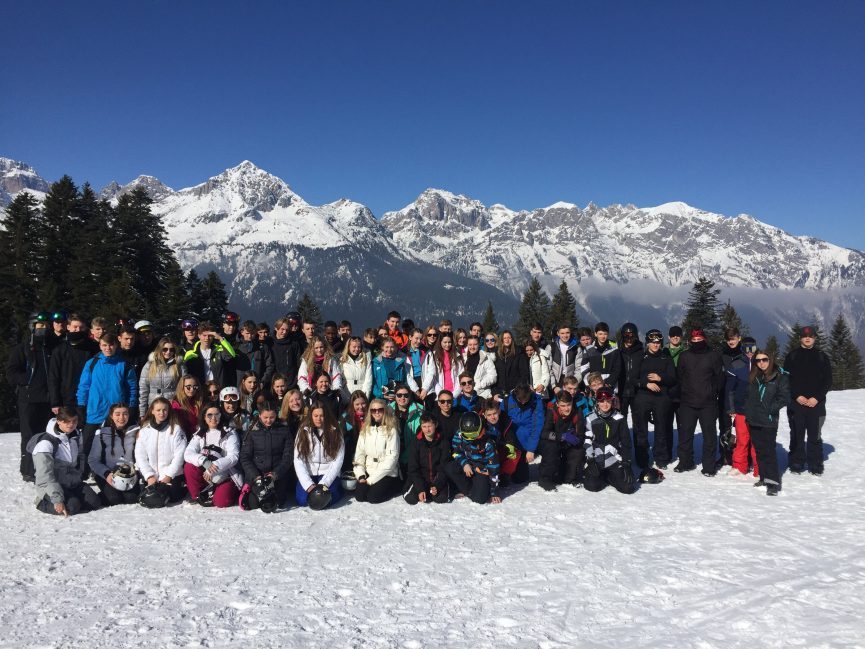 It’s two weeks to the day since we met 77 excited students and 12 teachers at Stansted Airport for a week’s trip to Andalo, situated in the Trentino region of the Dolomites. After a journey spent getting to know the group we touched down at Milan Bergamo Airport in showers of snow covering the ground, which was to continue for the duration of the trip. Arriving at the resort, the first stop was Hotel Olisamir for a tasty evening meal before we called it a night to rest up for the action-pack week ahead.

Our first morning was spent at Andalo ski fit ensuring everyone had appropriately fitted equipment. The dedicated staff serviced all 89 people in just under two hours, accentuating their professionalism. After fuelling with some delicious pasta at a local restaurant, we made our way onto the slopes for the first lesson of the St Martin’s school ski trip. Blue and red runs largely dominate the slopes – ideal for the group which consisted of mostly beginners – although the students soon got the hang of it, with many even trying the black slopes by the end of the session.

The evening activities were at the local sports centre where some students took to the skating rink while some opted for a leisurely swim. After a busy day it was time to get plenty of rest for the second day’s skiing. 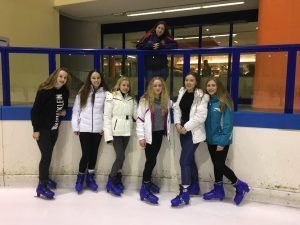 Day two on the slopes saw a change in the beginners of the group who had made noticeable progress by the end of their 5 hour lesson and confidence all round was starting to show. The evening was open for the students to either relax and watch a film or head to the games room at the local sports centre. With six pool tables, two air hockey tables and numerous arcade games, there was no shortage of activities to keep them occupied.

As the week progressed all the groups continued to vastly improve their skiing ability, with students making it off piste by the third day under supervision in the allocated areas.

Day five was a highlight for St martin’s, starting with a morning ski lesson followed by some free time to explore the quaint town of Andalo before heading off to enjoy a spot of toboggining. After dinner it was then time for night skiing and the slopes to ourselves, with the exception of an endurance race that was taking place from the top to the bottom of the mountain. The enjoyment under the stars ended up being the highlight of the week for the majority of the group.

It was back to a normal ski day consisting of a four-hour lesson on Day 6 and once again there was a great choice of evening activities. This time it was pizza night followed by a disco in the function room of the hotel. With flashing lights, plenty of music and a great atmosphere this sure was a memorable evening for all- including us!

On the penultimate day, we departed the ski resort and headed for a night in fashion capital, Milan. First, we headed to the San Siro Stadium, the home of AC and Inter Milan – two of the biggest clubs in world football – for a guided tour. This concluded in the official club shop and it’s fair to say the shelves were almost stripped bare by most the group buying merchandise and presents.

The Piazza Portello shopping mall in Milan gave most of the girls a chance to buy their own gifts and treats. After a few hours relaxing at the shops we checked into our Milan hotel and enjoyed another tasty evening meal before the ‘Awards Night’, which wrapped up another fantastic school ski trip.

The Trentino region of Andalo is the perfect resort for all abilities, making a school ski trip here successful for all. To find out more about the resort of Andalo click here or to enquire about heading here in 2018, view our special offers or contact the team on 03333 111122.

Not only are our students great skiers they can also take an awesome picture! Ski trip 2017 through the eyes of our students #andalo2017 pic.twitter.com/Krj6uyiqmz