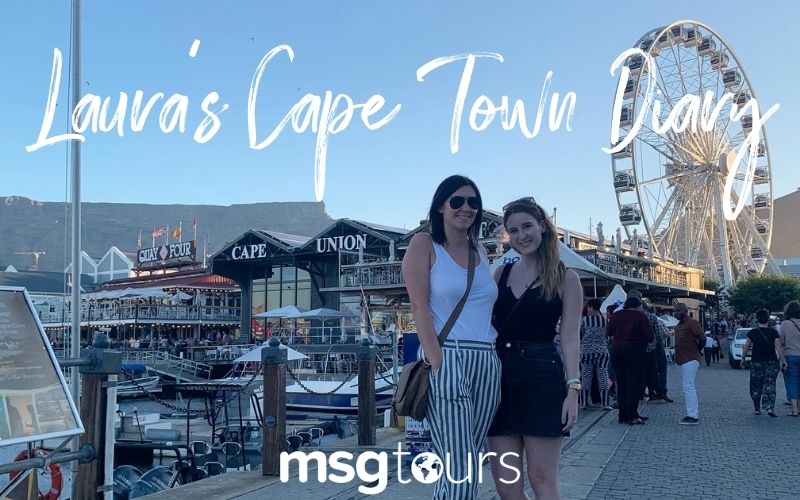 Perched beneath Table Mountain and sat alongside the Atlantic Ocean is South Africa’s big draw. The city with an image which would be worthy of any postcard. With its coast and landscape mixed in with African culture and cuisine, Cape Town is a must visit for all who treasure travel. It was high on Laura’s bucket list, who was eager to visit the Mother City for the very first time. She tells us why Cape Town stole her heart on MSG’s inspection visit back in February.

When I was told I was one of the lucky three that got to go on our Lions 2021 tour to South Africa Inspection Trip, one place immediately sprung to mind – Cape Town (and not because that’s where they were filming Love Island at the time.)

When I think of South Africa, I think of two things; going on safari and Table Mountain. So, with the Safari ticked off the bucket list, seeing Table Mountain in all its glory overlooking Cape Town was the next ‘must do’ for me.

The trip was non-stop; making sure we left no stone unturned to ensure this was going the best Tour yet for our valued Supporters. So, a 6am flight from Durban and three hours sleep the previous evening meant we were all pretty blurry eyed landing in Cape Town. But, I wasn’t going to miss a single thing over the next 24 hours!

Driving through the rush hour hustle and bustle of Cape Town, I soon perked up and made sure I was taking in as much of my surroundings as possible. It didn’t take long before the legendary Table Mountain came into view. And from that point on, it hardly ever left our sight. It was everywhere you looked and every time you saw it, it was as impressive as the first time you laid eyes upon it. It was such an imposing feature the whole time we drove along the highway and on to the coastal roads. I was in total awe.

Cape Town itself reminded me of so many different places that I had already visited including Sydney, Auckland and even an element of the Mumbles. We spent the morning strolling around the city before making our way to our featured hotel – The President.

I have to say, The President Hotel is an absolute gem and makes the ideal spot for our MSG Base Camp. Nestled beneath Lion’s Head and with views out across the Atlantic Ocean, it has the perfect balance of stunning sights wherever you look. Looking out across Saunders’ Rock beach, we were even able to spot a few whales from the hotel!

At sunset, we made our way to the famous V&A Waterfront, which was the highlight of my day. Our Supporters will definitely be spending plenty of time socialising here. That’s for sure! As soon as we left our vehicle, we were met by local street performers, singing and dancing in front of crowds of visitors. I wish I could have stayed there all night to soak up the African atmosphere, but we had inspecting to do!

Flooded with bars and restaurants and overlooked by Table Mountain, you certainly won’t be short of places to eat or drink during your stay in CT. More vibrant street performers greeted us as we walked around the harbour, giving us that traditional South African feel. It was a place I really did not want to leave.

Come with us to experience Cape Town next year

When the team eventually dragged me from the Waterfront, we made our way to GOLD Restaurant for dinner. Mark had previously mentioned that this was a ‘must do’ in Cape Town. That is why it is included in all of our Supporters Packages for next year.

Mark didn’t want to give too much away to spoil what was in store for us so I’m going to do the same and keep my lips sealed. What I will say is that it did not disappoint! It was like stepping out of modern Cape Town and into the traditions and culture of South Africa, perfectly executing great food and amazing entertainment (bit of a cliché, but I’ll say the company was half decent too.)

I’ve finally ticked Cape Town off the bucket list on our fleeting visit and it’s fair to say it lived up to expectations and more. Now I can’t wait to return and dig further beneath the skin of this picturesque and cultural gem alongside our amazing Supporters next summer!

Find out more about our Supporters’ Tours to South Africa 2021