On Wednesday 19th October, 16 girls from Rydal Penrhos School left north Wales behind and embarked on a 5-day netball tour to Greece. Accompanied by Mrs Head, Welsh International Netballer, Suzy Drane and MSG Tours Representative, Katie Peggs the group arrived in Athens to blue skies and a warm welcome from our hosts, SportCamp. After settling in (and hunting out the all-important Wi-Fi code) the girls got stuck into netball training followed by a dip in the pool, hot chocolate from the bar and a well-deserved early night.

On the first full day of tour the group enjoyed a morning of relaxation and exploration of the SportCamp site before heading to Loutraki beach where they enjoyed the coast and delicious food, including a warm Nutella filled waffle (a must have!) The overcast weather didn’t dampen spirits as the team returned to SportCamp to prepare for their first fixture of the tour. 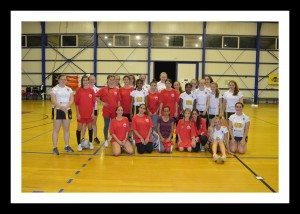 zy happily helped the opposition with coaching advice throughout the match) and patience from the girls but by the end of the first half of the match you will start to see strong competitors emerging.  However, when playing Rydal Penrhos there was no defeating the strong units and both the A and B team won their fixtures.

Friday delivered the best weather of the week and it couldn’t have been better timed as this was the group’s day to enjoy some of the culture that Athens offers, starting with the Acropolis. Sitting at 150m above sea level (with around 150 steps leading to it) the Acropolis offered beautiful scenery and is steeped in Greek history, the group had a fantastic morning here before moving on to the Panathenaic Stadium. Situated just 10 minutes from the Acropolis this is the only stadium in the world to be built from marble and everyone learnt something whilst on their visit (even the teachers!)  This was a great stop for a sports tour as it is home to every Olympic torch since the first modern Olympics.  With a free guided tour it provided cultural enrichment and a chance for the girls to soak up some of the local history.

After a jam-packed day of sightseeing, followed by a stop at the Athens Mall (so that the girls could do what all girls do best… SHOP) it was time to head back for some food at SportCamp. After dinner consisting of pasta carbonara, Greek spanakopita, salad and fruit the tour group celebrated a birthday with an unexpected delivery of chocolate mousse cake, ordered from a local Greek bakery.  Everyone agreed it was a lovely end to the day!

Saturday in SportCamp brought what can only be described as a very rare downpour. The heavens m 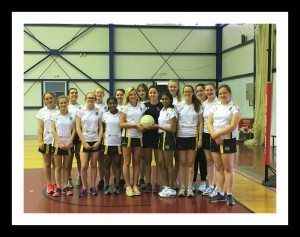 ay have opened but it didn’t stop the fun. Suzy led a video analysis of the previous match and the girls set goals for their next fixture. As the opposition arrived the rain eased off the Rydal Penrhos team psyched themselves up for their next fixture. As the game began you could see the training was paying off. They were patient with the ball and unforced errors dropped substantially. At the end of 120 minutes both Rydal Penrhos A and B came away with wins, meaning their success rate in Greece is 100%, something they could be proud of. What was lovely to see was that there were some familiar faces in the opposing team and many girls who had played the first fixture came back to challenge the reigning champions. The atmosphere was one of excitement and the touring team helped coach their opposition as they played thus by the end of the match friends were made and everyone had smiles on their faces.

As the tour came to an end the group, along with Mrs Head, Suzy and Katie enjoyed their final meal at SportCamp. Everyone was in high spirits after a fantastic week and a few took to a game of table tennis, determined to lengthen the fun on tour. We at MSG Tours are extremely happy that everyone had such a fantastic time and look forward to sending many more groups to enjoy SportCamp, our favourite destination for school netball tours.

Welsh Netball captain, Suzy commented after the trip that “I feel very fortunate to have been given the opportunity to be part of such a fantastic tour. The organisation of the tour was superb throughout the duration of the trip and the team in charge couldn’t have been more helpful. The tour was made even more enjoyable with the company of a friendly and personable representative who was more than willing to help wherever she could. I look forward to the next one.”

PE Teacher, Mrs Head spoke to Katie after the trip “Thankyou for a fantastic trip to Greece. It was a most enjoyable trip for the girls, from arriving at the airport to bidding their very own Katie Peggs farewell on our return. Having been on several tours in the past, this was by far the least stressful trip I’ve experienced thanks to Katie being on hand throughout the trip.

The facilities in the sports camp were just what we needed to encourage team bonding. Loutraki Sports Camp went over and above to help us (even going as far as washing and drying our clothes when we were caught in a downpour.)

The trip really opened up the girl’s minds to what a sports tour is about and how it is more than just playing netball. Our day in Athens was amazing especially seeing where the Olympics as created. I am looking forward to planning our next tour in the very near future. The girls and I had a fantastic time. I was really worried about going away for many different reasons but it truly was an amazing tour.”

Contact katie@msgtours.com for information on taking your school on a netball tour to Greece.