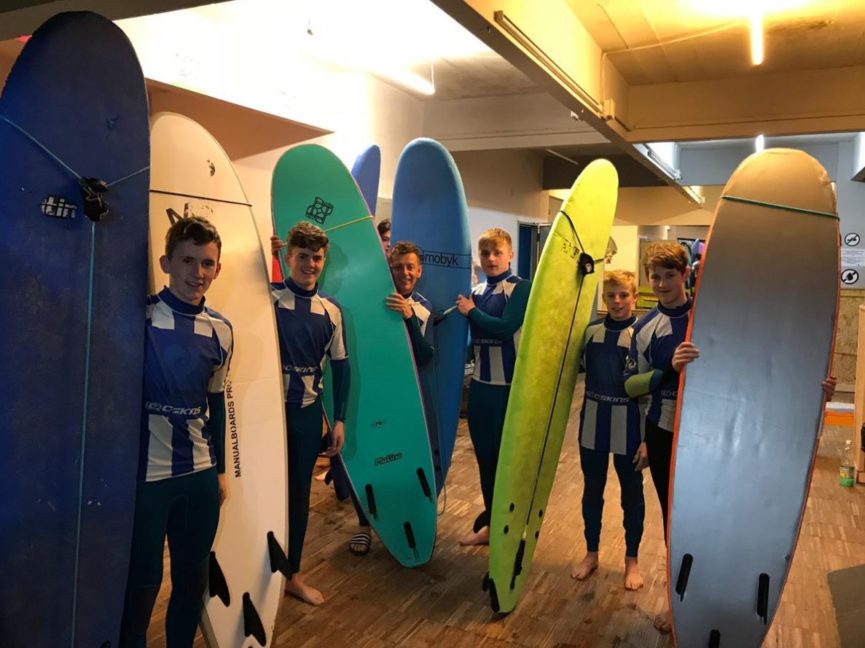 Our European office in Bayonne has welcome some of the country’s leading Prep Schools to the Basque region over the past year for rugby, football and hockey tours.

Our activities have incorporated visits to the iconic San Mames stadium (home to Athletic Bilbao, and venue for the European Rugby Champions Cup Final between Racing Club Paris and Leinster). Caldicott School’s Director of Sport, Matt Hutchings was eager to stress the importance of activities away from competition that gave the children a sense of background to the area they were visiting.

Thomas’ Clapham and Belmont School played matches against the juniors of Section Paloise (Pau) before watching their Top 14 team play at the intimidating Stade Hameau stadium. Nick Bird (Belmont) elaborated on this point by adding how fantastic it was ‘’watching the boys come together as one and coming of age whilst enjoying sport and culture’’.

The visit to the Dune de Pilat in Arcachon with Thomas’ Clapham proved an incredible backdrop and poignant setting of the sun that signalled the end to their tour in April, utilising our base in San Sebastian on their prep school sports tour.

The Playa de la Concha, San Sebastian’s signature beach has seen sessions of beach football, rugby and hockey as well as some volleyball and sports that have been created by the minds of 12 and 13 year-olds. Free learning, they call it these days.

Ricky Nebbett from Thomas’ felt that San Sebastian was an “excellent and safe location with a friendly host community”.

Across the other side of town at the Playa de Zurriola is where groups have donned wetsuits and surfboards to try their hands at another Basque staple – surfing. As Nick Bird (Belmont) commented, “this is a once in a lifetime opportunity for some young tourists as there is not a huge surfing presence in the Barnet area!”

Caldicott’s early September 2018 fixture against Aviron Bayonnais permitted them to test themselves for the second year running against the pride of the French Basque region. They certainly hit the ground running and left a very healthy impression on the young Bayonnais.

St. Paul’s Juniors returned in 2018 for their second prep school sports tour visit in consecutive years and used the time to taper their training for the forthcoming season and also build a strong team ethos amongst themselves. Head of Rugby Simon Cattermole described it as a “top rate pre-season tour” and the boys loved exploring the winding streets of Bayonne and the beautiful coastline surrounding Biarritz and St. Jean de Luz.

In recent weeks we have had visits from the two Dulwich based powerhouses – Dulwich College and Dulwich Prep London – on football, rugby and hockey trips.

They both managed to squeeze in visits to the trampoline park during inclement weather, a pelota introductory session plus a live professional match. The U12 football team made the trip deeper into the Basque region to watch Alaves in their Copa del Rey match with Girona.

One particular Dulwich College comment proffered, which brought smiles to all involved in the preparation and delivery of the tours, encapsulated the reasons why we do what we do and our pursuit to continually exceed expectations: “Everything ran as expected and better – you can’t improve upon that! There will always be curveballs and there should be room for change but it was managed and handled superbly and we cannot thank you enough for making the tour what it was!”

We greatly value the loyalty shown by these schools and look forward to welcoming old friends as well as making some new ones into 2019 and beyond.