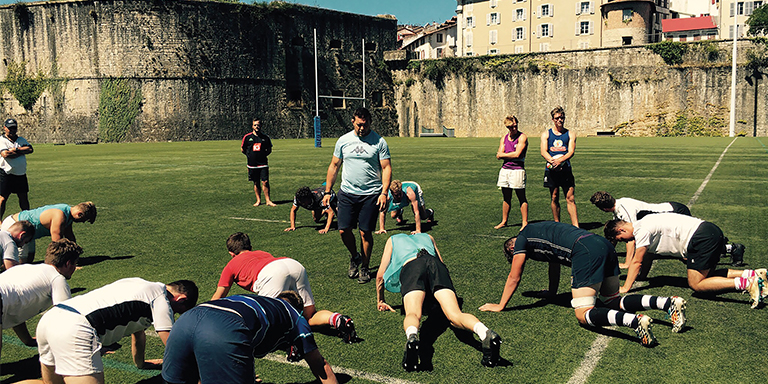 The MSG European Operations team were in full flow over the recent October half-term. Tony Jones, Ben Broster and I were all hands to the pump. Most importantly, we were honoured to be joined by Kyran Bungaroo. It was a glittering cameo from the England Rugby star, who came to speak to the boys from Queen’s College, Taunton.

During his talk with the boys, Kyran went into fascinating detail about his pathways from Brighton College starlet to the dizzying heights of Biarritz Olympique. Needless to say, it was an insightful and inspirational story for all to hear. Thanks, Kyran!

Meanwhile, Warwick School’s 3rd XV made the pilgrimage to Independiente’s home turf in the Spanish city of Santander. The action on the pitch then took us down to Pamplona’s bull-running country with Reigate Grammar U14s for their match against La Unica.

Learning Pelota in the Basque Country

Getting to grips with a new sport is something we’re pretty good at, here at MSG. However, I think it’s fair to say that Pelota looks a lot easier when it’s being done by the pros. This Basque Country sport was skilfully demonstrated by our guide, Endika Barrenetxea, while we were down there in the beautiful town of Hernani.

Nevertheless, the boys and staff were valiant in their attempts to give it a go. Albeit with varying degrees of success. (We’re not naming names, but I was brilliant!) Ah well, maybe the surfing saw greater degrees of proficiency. Then again, maybe not, but the effort and enthusiasm from everybody could not be faulted.

@warwick_school #rugby participating in a #pelota lesson on their #rugbytour to #sansebastian. Learning Outside the Classroom exists on all of our #sportstours #lotc #stf #basquecountry #schoolsport

More rugby with a healthy dollop of football and hockey

The atmosphere at the Basque rugby derby on Saturday 15th October was one to remember for the Queen’s College and Reigate Grammar lads. Who said that French teams don’t travel well? Biarritz came out winners by 30-24! The fact the journey is only 7km between the two grounds probably has something to do with it in this instance.

The last few days of the break were spent with the joint U13 hockey and football group from Dulwich College. In between their own matches and training, Dulwich was lucky to witness the hockey matches at Club Atletico San Sebastián. This was capped off with a thrilling 2-2 draw in La Liga between SD Eibar and Levante.

If there’s one thing integral to the performance of all sports teams, it’s got to be ‘preparation’. And what better facilities to ready yourselves for a match than the world-renowned training fields of Real Sociedad. Dulwich College footballers enjoyed a tour and game at the hallowed turfs while visiting this iconic part of northern Spain.

.@dulwichsport working on their marginal gains with @RealSociedadEN on their #football #tour to San Sebastian pic.twitter.com/fyvn8x4eW7

The tour also took the group to St. Patrick’s English school in San Sebastián, where an afternoon of multi-sports was enjoyed between the girls and boys. It also provided the group a unique opportunity to brush up on their Spanish.

Despite the whistle-stop nature of the trips, it was great fun to experience two countries in one go. Needless to say, we can’t wait to welcome these guys back in the future!

With football, rugby, and hockey tours all available for both girls and boys, you may want to consider the Basque Country for your next school sports tour.

In the meantime, get in touch and speak to a member of our team for all school sports tour enquiries here