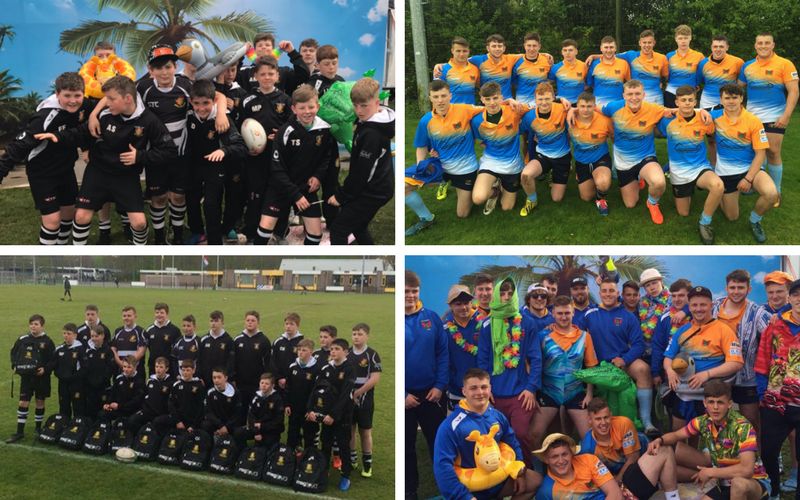 Over Easter weekend two teams from south Wales embarked on two very different tours to the Netherlands with ultimately one thing in mind; to return champions of the Hilversum Youth International Tournament 2017.

First to depart on the 14th of April was Chepstow U13’s. Travelling with Aston’s Coaches and accompanied by their driver Dave, this 44-strong group left Chepstow behind and after a quick hop across the channel and short drive the other side, the group arrived in Soest early evening. After a smooth check in into their accommodation, the well-located StayOkay Soest, it was time to settle down for some well-deserved food and an early night ahead of a busy three days.

The next morning Chepstow headed to the renowned Amsterdam Arena for their very own guided tour. After experiencing the home ground of AFC Ajax, the group had the remainder of the day to explore the delights of Amsterdam and relax in preparation for a rugby-fuelled Sunday.

Whilst Chepstow were kicking back in Amsterdam, Newbridge RFC U17’s began their journey from Bristol Airport to Holland. After a quick one hour flight, the group were met at and transferred to their hotel, the StayOkay VondelPark.

Sunday 16th April was the day both groups had been waiting for; The Hilversum Youth International Festival. 50 teams from around the world descended on Hilversum Rugby Club for a full day of high-quality rugby and delicious food. The weather may not have been on their side but spirits were still high.

Newbridge RFC U17’s finished top of their group having won all their games and concluding with eight points meant they faced Medway RFC in the grand final. An impressive 19-0 win meant they were victors of the U17’s tournament!

Chepstow U13’s also had a fantastic run of wins in their pool winning their first two matches 40-0 and 35-0 respectively. An unfortunate loss to Old Whitgiftians (10-20) meant the team needed a final win to be victorious in their age category. The group faced Littleborough RFC in the deciding game, drawing 20-20 which meant that Chepstow RFC finished second in their group overall, narrowly missing out on the title. What an effort!

fantastic weekend with the @CHEPSTOWRFC under13s. The boys came 2nd in the tournament and were credit to the club on & off the field #proud pic.twitter.com/N8vvMq9ntn

That evening, both groups returned to their hotels for a delicious meal and a chance to relax and recover from what had been a momentous but tiring day.

It was home time for Chepstow RFC on the Monday morning, but after arriving a day later, members of Newbridge RFC had a day to themselves to enjoy a spot of sightseeing and shopping around Amsterdam, before heading back to the UK on the Tuesday.

Newbridge RFC player, Zac Morgan said: “It’s been a fantastic tour, I’ve loved every second of it. It was a great experience with all the boys and I can’t wait for our next tour with MSG.”

Find out more about rugby tours to Holland here or submit a quick enquiry form here. Alternatively, you can contact us directly on 03333 222211 or at info@msgtours.com