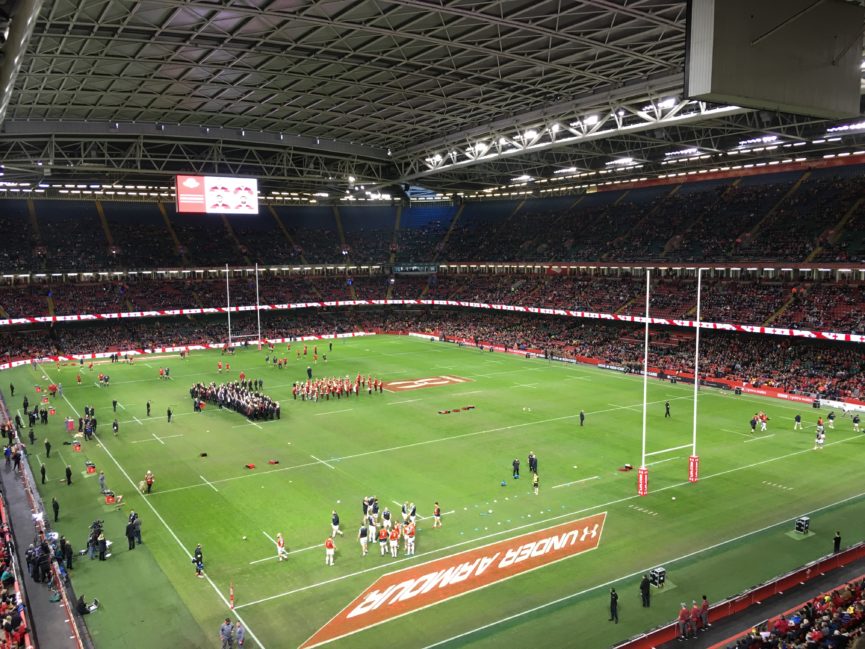 Traditions continued in Cardiff at our annual Sporting Saturday in support of Wales’s Autumn International against Tier 2 nation, Georgia.

Our annual hospitality fixture welcomed 140 guests to the Radisson Blu Hotel in the heart of the Welsh capital. Representatives from our touring clubs, schools, universities and armed forces sides joined members of our Supporters Tours for lunch and pre-game event featuring speakers from the rugby world.

Hosted by BBC Wales’s Phil Steele and Paul Fielding of Legends Hospitality, the two-hour function featured a well-received interview with Lasha Khurtsidze, Georgia Rugby Union’s Head of Operations and Lexo Gugava, former player and Board member. Their insights proved both entertaining and amusing although their hopes of a maiden victory over the Dragons fell slightly short in the Principality Stadium.

Thanks to Mark + all @msgtours for lovely welcome at pre-match function yesterday. Good to see you doing so much for rugby in Tier 2 Nations

Paul’s interview of Phil’s career demonstrated his versatility in both the education and sporting worlds. More accustomed to being on the other side of the mic’, Phil soon returned to natural ways with his ‘around the ground’ interviews of the day’s sponsors and supporters of MSG Tours.

Our thanks go out to ex-professionals and second-row sparring partners Andrew Coombs and Mike Powell for completing the lineup. Hearing their stories of competing against each other and their pro sport highlights rounded off a superb afternoon that finished with live music and plenty of chatter about forthcoming trips and tours.

Great to spend the day with @msgtours yesterday, talking all things rugby and business. If your club are considering a tour, MSG are the guys to book it with #MSG #SportingSaturday pic.twitter.com/JVUZLzkRRQ

The event doubled as a reunion for our 2017 British & Irish Lions supporters who spent the morning spotting themselves on our video highlights of the epic summer tour to New Zealand and Fiji.  Our returning clients were treated to an advance screening of our forthcoming Wales supporters tours to Argentina, European Rugby Champions Cup Final to Bilbao, Rugby World Cup, 2019 in Japan and the 2021 Lions Tour to South Africa.

“Thanks for your hospitality today Mark and everyone at MSG, hope everyone enjoyed the Baa!”

Huge thanks goes out to our fantastic supporters of MSG and to the Radisson Blu for hosting our 2017 edition of our Sporting Saturday.