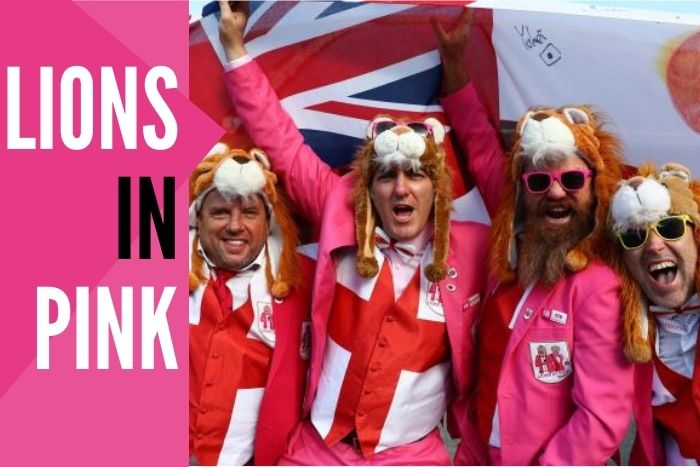 The Lions in Pink and MSG in Partnership

The Lions in Pink, with 135 years of service between them, are made up of six former members of the British Army who served together in the Royal Engineers and we are excited about our partnership with our friends!

The team prides itself on organisation and planning, along with a huge amount of overseas experience in South Africa, New Zealand, Australia, USA, Canada, Europe and beyond.

Our partnership with the Lions in Pink signifies the creation of bespoke Supporters packages that will accompany the gregarious gang of pink-suited, passionate Lions fans as they make waves in the Southern Hemisphere.

The decision to work and travel alongside the Lions in Pink was a no-brainer. We hold much respect for any member of the Armed Forces (active or retired) and so, we want help where we can and ensure that whoever decides to travel with the Lions in Pink will do so at a great price.

We can personally vouch for the fantastic memories that touring with the Lions in Pink will create as they came with us to New Zealand in 2017 and will now lead their own tours in South Africa 2021.

On top of this, MSG would like to emphasise the inclusion of the Royal British Legion as the sole British-based benefactor of our One Million Rand charitable project. The Royal British Legion provide lifelong help and support to service personnel, serving and ex-serving, and their families. Whatever the reason, they help; providing guidance and advice, assisting with recovery, rehabilitation, and the transition into normal civilian life.

The six former members of the Royal Engineers who founded the Lions in Pink highlight the value in supporting our ex-servicemen and women. Including ‘The Legion’ as our only British charity allows us to thank people like the Lions In Pink and help others who have served our country.

BROWSE THE LION IN PINK DEALS