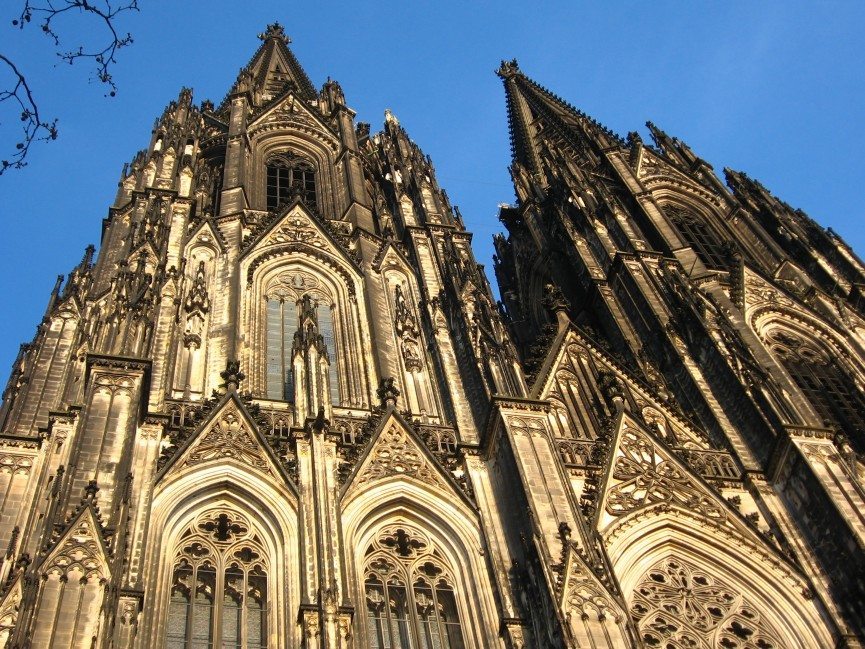 At 6:45am on Wednesday 23rd November 2016 fifty sleepy Lawrence Sheriff School students and five accompanying staff ((Mrs Standing, Mr Groves, Mrs Costello, Mr Poppa and the MSG Tours Representative Meg) boarded their coach and set off for Cologne. As the sun rose over the M25, the boys munched on their packed breakfasts (pulled pork rolls for one lucky student!) and within no time at all they were onto the ferry at Dover.

After arrival at Dunkirk it was onto the coach again for the 6-hour journey to Cologne, the boys deciding to entertain the staff and coach driver Carl with countless renditions of Pitch Perfect and Wonderwall, Carl giving his honest opinion of the performances over the on board microphone. Many 80s pop songs later we arrived at A&O Neumarkt just in time for their pre-arranged beef goulash dinner. After cakes and birthday wishes for Owen, who turned fifteen whilst en route, it was time for an early night.

The next morning the sun shone bright and temperatures were very mild on as Sheriff made their way to the Cathedral for their first excursion of their languages trip. The sunlight meant the boys could witness the huge stain glass windows in their full glory and the tour guides taught the group all about the history of this incredibly impressive building.

After learning about the origins of the Cathedral we headed underground and further back in time to view the Roman ruins of Cologne at the Praetorian. With all-German display boards the teachers could test out the translation skills and the depth of vocab of the students. The nearby Altstadt Christmas Markets gave the boys their first chance to experience the German Christmas traditions, taste Bratwurst and take photographs for Mrs Standing’s competition, of which categories included ‘Most German-German’, ‘Biggest Bratwurst’ and ‘Best Hat’. 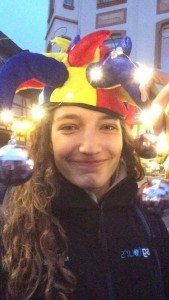 After lunch, Sheriff cruised up the Rhine, enjoying hot chocolate and cake, viewing the sights of the city in the sunshine. On board, German commentary meant the boys had to put their listening skills to the test in order to understand which buildings were being referred to. The Chocolate Museum was next with its fascinating exhibitions and delicious aromas, where most of the boys ate and purchased their weight in chocolate. Some of the boys ordered their own chocolate, filled with components of their own selection so vocabulary skills were crucial here in order to ensure there were no unwanted ingredients in their treasured final product! Dinner at the Hard Rock Café certainly filled any remaining holes and gave everyone the chance to relax. A visit to the Cathedral Christmas Markets, situated below the largest Christmas tree in the Rhineland, was the last activity of a fun-filled busy day.

Day two commenced promptly as Sheriff boarded the coach at 8am for a day of touring the best of the Rhineland and exploring the charming, traditional German villages. After repeated renditions of Rick Astley, Carl decided enough was enough and played Madonna’s Greatest Hits at full volume in an effort to educate the boys in ‘real music’. We arrived at Marksburg Castle with the sounds of ‘Holiday’ ringing in our ears in time for our guided tour. An impressive fortification, Marksburg Castle gave the boys an insight into medieval warfare, defence strategies and everyday life during the Middle Ages. After a quick Mezzo mix refreshment break (an apparently delicious Coke-Fanta combination drink) it was back on the bus to Ehrenbreitstein Fortress. 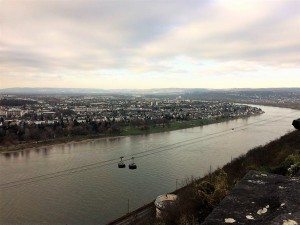 Sitting high on the hill overlooking the town of Koblenz, the Fortress offered stunning views of the Rhine Valley and an eclectic mix of exhibitions, military and historic, for the boys to view. The underground movie cave was a particular favourite for those who could find it!

The final activity of the day was the extremely competitive Treasure Hunt in Boppard organised by MSG’s Meg. Based around the main square of the beautiful old town the boys were put in teams and scouted out the streets and shops. With both questions and directions written in German, the boys worked well in their teams pooling their knowledge and language skills to complete the challenge. Although one team acquired help from some local children, the teachers let that slip on the premise that at least they were practising their German communication skills! After a spot of Apfel Strudel and hot chocolate it was back to the hostel for dinner and quiz night.

A chilly Saturday morning did not dampen the boys’ spirits for the most awaited excursion of the trip – Phantasialand! After a few hours on the high street and at the Markt der Engel it was time to head off to the theme park. With 36 rides, 7 rollercoasters and 8 different themed lands the boys had an incredible time. One student decided he was going to move to Cologne when he was older and visit Phantasialand every single weekend. Another repeatedly stated he wanted do this exact same trip again next year because Phantasialand was the best place ever. His opinion could have been influenced however, by the once in a lifetime hilarity of witnessing Mr Grove scream at an incredibly high pitch in the Mystery Castle, after being scared witless by man hidden behind the door. After watching the fireworks and fairy light spectacular of the Wintertraum it was back to the hostel to pack up.

With heavy hearts and even heavier suitcases Sheriff left Cologne behind on Sunday the 27th. Making the 14:00 ferry by the skin of their teeth (boarding at 13:58) the winners of the week’s competitions were announced and prizes awarded. Although the teachers never did find the Bee Movie (which the boys repeatedly requested), in-transit viewing of Frozen appeased the group and this carried them through to arrival back at Lawrence Sheriff at 7pm.

A fantastic trip, full of exciting excursions and educational activities, with a great bunch of students providing entertainment every step of the way. We hope Lawrence Sheriff choose MSG Tours to deliver the unexpected again on their next languages trip.

Thank you to Meg and all @msgtours for an excellent few days in Cologne. Same time next year?!