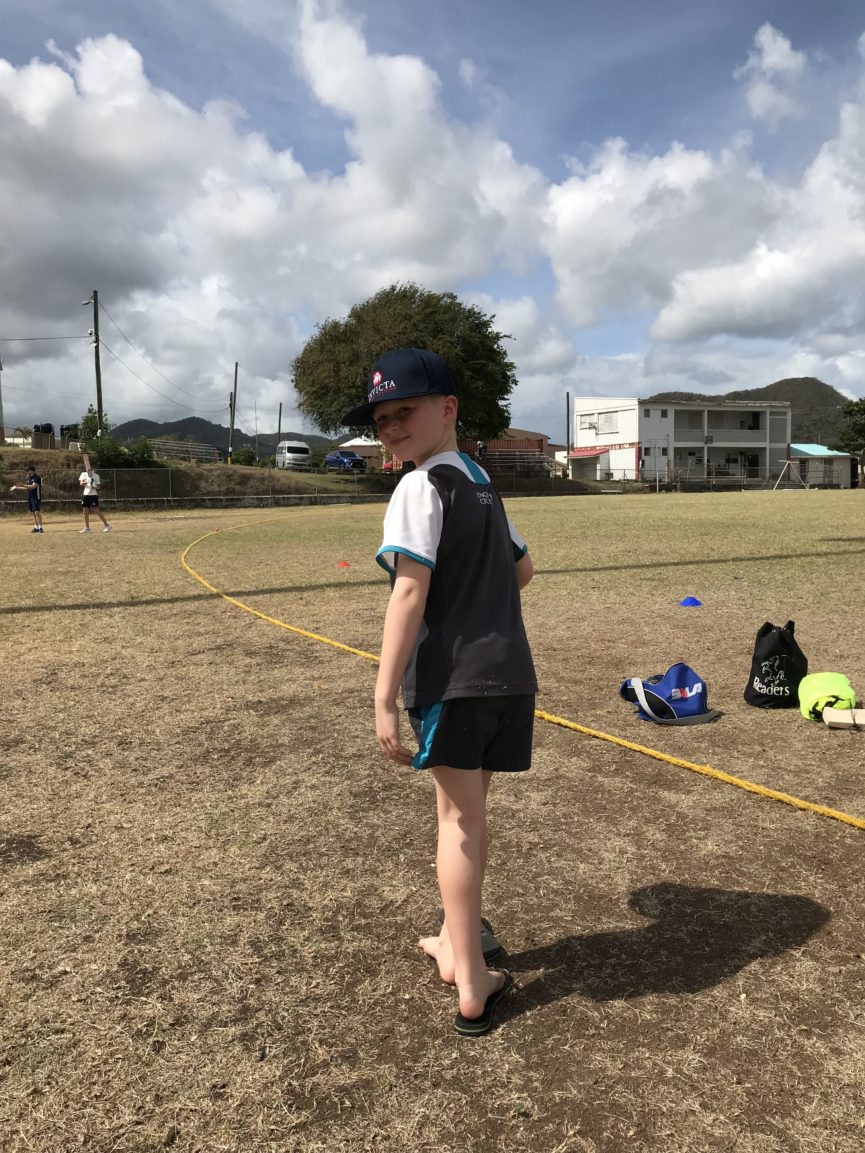 It’s a daunting prospect, sitting there in your hotel room (‘room’; a grandiose term for a neon lit box in Gatwick’s departure terminal) getting ready to meet 61 strangers to fly across the world together.

Thankfully we checked in fine and no one seemed to take an immediate dislike to anyone, so my nerves were calmed. Invicta Cricket Academy are run by a talented and forward-thinking group of likeminded people. One criticism would be the number of Mikes employed by the company. With 3 of the 4 coaches, plus myself, I had never encountered such a dense population of Mikes.

The direct, 8-hour flight to St Lucia flew by (pun intended) and we were soon touching down in the Caribbean. Outside the airport we were greeted by our man on the ground, Roland, resplendent in Manchester United shirt and ready with buses to ferry the group and luggage to Rodney Bay.

The beauty of Rodney Bay

The rain was well and truly pouring as we arrived at the Bay Gardens Inn, but it did nothing to dampen the excitement as we quickly checked in and freshened up. The beauty of the Rodney Bay area is that you have a host of restaurants and shops all within walking distance. We descended en–masse to a local establishment where the owner looked like he’d gone 10 rounds with Tyson by the time service for 61 finished.

The following morning was an early start as we headed out to the rainforest. I’ve long maintained that no one looks good in a climbing helmet and harness but at the Tranopy Experience they made extra sure by completing the ensemble with a paper hair net. I’d like to say that I was the exception to this rule, but I was just one of a plethora of Mikes struggling to bring some grace to the outfit.

The Tranopy experience consisted of taking a cable car up through the dense forest before making our way back down via a series of ziplines. That’s the simple explanation but doesn’t do justice to the knowledge of the local guides. They knew every Latin name for every tree and shrub (I know this because I pointed at just about all of them and said, ‘what’s that?’) and brought incredible energy to the day as we weaved through the trees.

The next day we took the short transfer across to the Darren Sammy Cricket Ground for a day of training. As a starting venue it set the bar about as high as it’s possible to set it. With England having visited just a month prior, it really brought home the significance of the experience for the Invicta cricketers.

Match day had arrived, and we found ourselves back at the Darren Sammy Ground. The bar was raised yet further (probably by one of the 6’2” members of the local u-13 squad) as they were tested against some very strong local opposition.   After a hearty local lunch of mac and cheese, jerk chicken and rice, it was back on the bus to Rodney Bay. It’s a lot simpler writing this than physically making it happen as the Caribbean interpretation of the word “soon” is very different from the British. “Soon” lost all meaning to me during my time on the islands as it could signify anything from “the bus is already waiting, get outside!”, to ‘give it an hour.” However, that was the magic of St Lucia. It might not happen on time but when it does happen, everyone has a smile and makes you feel so welcome you forget about anything else.   So, after five days in St Lucia it was time to hop on the short flight to Barbados. On arrival you immediately get the feeling that the island is a little more established, with a modern airport and a no fewer than three local reps to greet us and guide us to our transport. A nice touch was a large luggage truck which made the process of loading the extensive amounts of cricket gear a lot easier.   The first full day began with the teams training and myself and an Invicta coach (let’s call him Mike) taking the local reggae bus (aptly named given the booming reggae and dreadlocked driver) to Bridgetown in search of new cricket balls for this evening’s night match. Thankfully we were successful, and the night match was one to remember as Invicta pushed the Northern Cricket Academy all the way under the floodlights, the game being lost on the final ball.

All set for the u-16 fixture today Vs John Eugene Cricket Academy – come on @invictacricket!! 🙌🙌🙌 pic.twitter.com/SuBqjtlbIy — MSG Tours (@msgtours) 8 April 2019

The cricket came thick and fast over the next few days with a couple of tough 40 over matches. So, by the end of the week everyone was excited for a private catamaran cruise of the coast. The kids snorkelled whilst the parents also occasionally surfaced for air at the open bar. Along the coast we gawked at the incredible mansions of Roman Abramovich, Rhianna and the Guinness family to name but a few and thoroughly enjoyed the sunshine and relaxation.

The Caribbean is an incredible place for a cricket tour. The mix of top-level venues like the Darren Sammy and the Kensington Oval, combined with the opportunity to play at less well-known venues means a great blend of challenges and opposition. The paradise coasts, joyous locals and range of excursions also means you’re never stuck for activities in your down time.

At breakfast the sunburn levels had risen significantly as several over confident members of the under 16 squad turned out to have been cutting corners when they insisted “of course I put it on” the previous day. Thankfully the heavens had opened as we made our way to the Kensington Oval which soothed a few of yesterday’s victims.

At the Oval, Invicta were able to hand over the fruits of their fundraising to local charity Sport For Life. In return the charity treated us to a talk on their work, a tour of the stadium and a brilliant Q&A with West Indies legend, Franklyn Stephenson. Then it was over to Oistins Fish Fry for a seafood barbeque before jumping aboard our direct flight home.

With thanks to British Airways.

Read more about our cricket tours to St Lucia and Barbados.