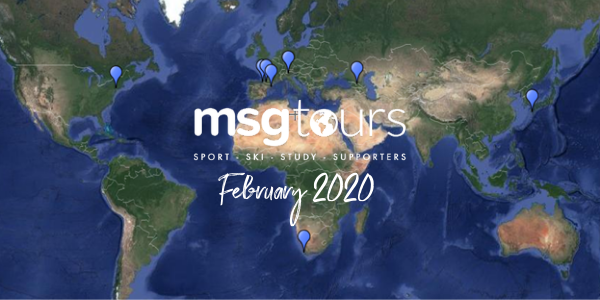 It was a busy but successful week for MSG Tours over the February school holiday as we sent eight schools on half term trips right across the globe. Four sports tours, two ski trips and two study trips left to create memories and experiences that they will never forget.

The United States was the furthest destination west of the UK while Japan was the furthest east. Five schools were spread across four countries in mainland Europe while the only school in the southern hemisphere visited South Africa.

This was a combined total of 214 students and 25 staff members or coaches who put their trust in MSG Tours to #DeliverTheUnexpected for their half term trips.

Staying #TravelPositive in what is a tough time, we want to share the amazing feedback we’ve received from our most recent trips. We’ve reflected on what we hope were unforgettable trips for every single one of these young people who went on them.

“The lads loved it and their cultural experiences. The Nou Camp where Barca made a real fuss of us was obviously a highlight. An unforgettable few days for the boys. They thoroughly enjoyed it!” – Merchant Taylor’s School

Our tours were spread right across the world with seven tours leaving British shores while the other school embarking on their adventure were from Dubai.

You can find out what the schools got up to on their half term trips below.

“The ski trip was brilliant and well-organised. I felt Liam was really attentive to our needs as a school – I couldn’t recommend him enough! MSG were open, honest and went above and beyond to cater for us as a group” – Putney High School

You can find out about what each school got up to on their half term trips in more detail by clicking on the relevant links.

For school or sports trips that are planning trips and seeking advice on organising future tours, please see Government advice.