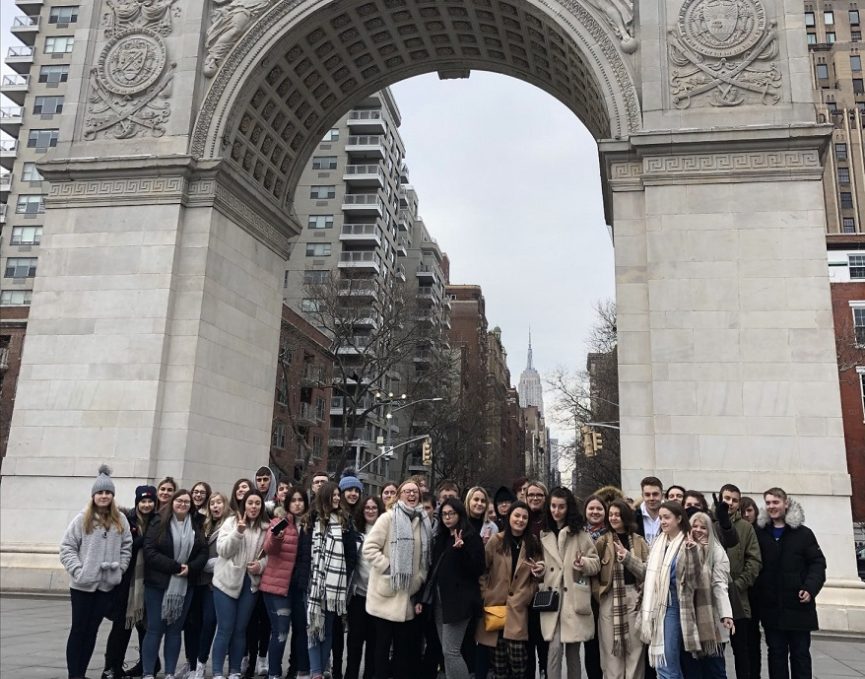 New York is known as the city that never sleeps and we’d be surprised if Tonyrefail School got any slumber on their Media trip.

A jam-packed itinerary saw the media pupils from Tonyrefail dive headfirst into the hustle and bustle of the Big Apple.

Their long weekend in NYC involved learning about the city’s rich Film and TV history as well as exploring its most famous tourist attractions.

Getting stuck into the media side of things, Tonyrefail started their first full day of their media trip in New York at NBC Studios. Shows such as The Tonight Show starring Jimmy Fallon and Saturday Night Live are filmed there and the pupils got behind-the-scenes access to their studios.

They even got to produce their own video, which you can view here.

NYC is featured heavily on the big screen and the media pupils got to see its famous film locations on a private bus tour. This included visiting the ‘Friends’ apartment building.

A workshop at the New York Film Academy concluded their trip. They got to explore the campus and get a taster of a student’s life at the Academy. There was even an opportunity to pick the brains of a director in a unique, learning experience.

#TCS2NY The pupils have been a credit to themselves, their families and @TonyrefailCS Thank you to the team who have been exceptional, & also to @msgtours for your constant support throughout. It’s been emotional. #42strong 🇺🇸🗽🙌🏻 pic.twitter.com/YSkFE9SI4r

You can’t go to NYC and not take in their most recognisable sights. Its one of the most visited cities in the world and that’s because of the sheer number of things to do and see.

Aside from film and TV, Tonyrefail took a ferry around New York Harbour where they witnessed the Statue of Liberty in all her glory. At the Top of the Rock, there was the opportunity to take in views of the legendary NYC skyline.

There was some important history to take in at the 9/11 memorial where the students learned about the World Trade Center terrorist attacks. And, staying just a stone’s throw away from Times Square, the bright lights and billboards showed the Rhonnda school where New York gets its nickname from.

Media trip to New York
Here is a selection of activities that Tonyrefail School did on their study trip to NYC:

What are the learning outcomes of this trip?

We can help you plan an outstanding media trip to New York. Get in touch and start planning your school trip today – all our trips are bespoke and you can tailor itineraries to your curriculum needs and budget.