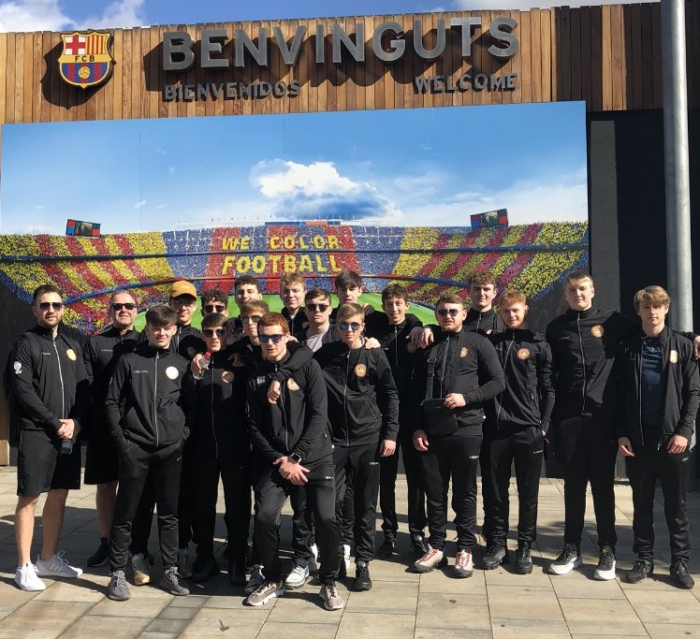 A football tour to Barcelona is always somewhere near the top of the list when choosing destinations for a trip away with your football team.

This is because the city boasts a rich footballing history which comes from being the home of one of the biggest football clubs in the world – FC Barcelona.

So, you wouldn’t be surprised that Merchant Taylors decided to take their February half term tour to the Catalonian capital in Spain. But, it was more of an historic connection which drew the Crosby-based school to Barcelona in particular.

This connection stems back to 1899 when Arthur Witty became heavily involved with the club as a director and a player. He suggested to the founder, Joan Gamper, that the club adopt the famous blaugrana (blue and red) colours.

Why did he suggest these colours? Because they were the colours of his former school’s rugby team – that team were Merchant Taylors’ School.

So, one of the first things that needed to be included in the itinerary of the Merchant Taylors’ football team was a tour of the Nou Camp and a visit to the FC Barcelona museum to learn more about their association with the world-renowned club.

DID YOU KNOW?@MerchantsCrosby are the reason why @FCBarcelona wear red and blue 😱

The boys learned more about their link with Barça on their tour of the Nou Camp yesterday ⚽#MSGSport https://t.co/TTC3klmMoV

Playing football and the city

But, as connoisseurs of tika-taka football, Barcelona is a city with many aspiring football clubs who play the Spanish way. Allowing clubs to test themselves against different opposition, the Merchant Taylor’s boys played in two matches – vs CE Jupiter and FC Barceloneta.

CE Jupiter provided a stern challenge for Merchant Taylors’ School as they went down 7-0 but they almost nicked it in a terrific match against FC Barceloneta where they lost 3-2.

Football and history aside, Barcelona is a beautiful city in its own right, and the boys got to see that for themselves. A cable car ride to the top of Mount Montjuic gave the squad views across the North-Eastern coast of Spain and they witnessed the artistic charm of Barcelona on a tour of the city.

Booking a Football Tour to Barcelona

We can help you plan an outstanding football tour to Barcelona. Get in touch and start planning your sports tour today – all our trips are bespoke and you can tailor itineraries to your curriculum needs and budget.