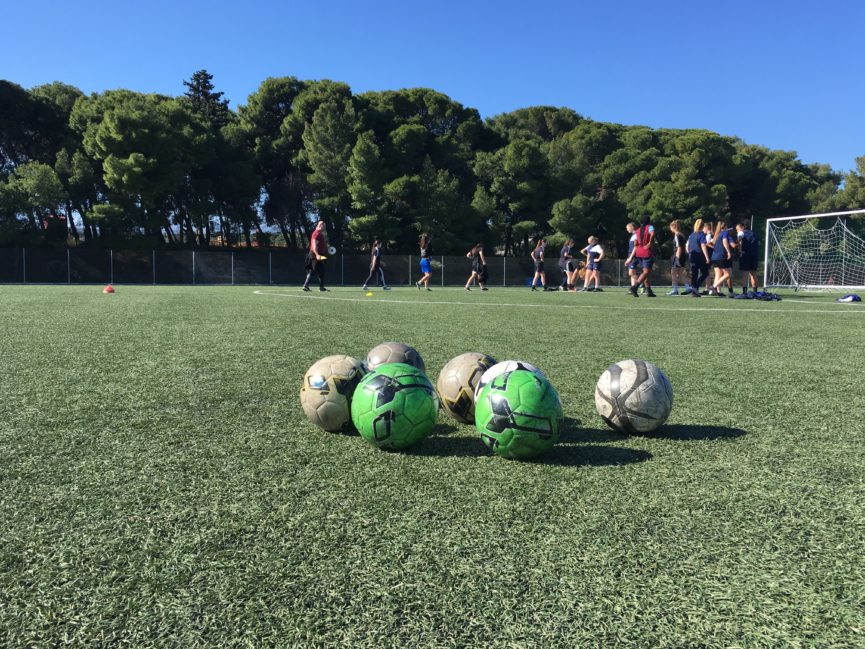 In February 2017, the Aspire Sporting Academy FC U16 Girls travelled to Greece for their much-anticipated football tour at our Sportcamp facility.

The tour package was created to provide the group with high profile fixtures, with enough free time in between matches to enjoy a spot of sightseeing.  The team travelled to Athens on day two to meet Glyfada FC. In a very tight match, the team playing on home soil secured a 2-1 win over the visitors from London.

The action continued and on day three, the team travelled to Athens for a morning of sightseeing at the Acropolis and Panathenaic Stadium, before arriving at the home ground of Atromitos Athens FC for an afternoon fixture.

With the sun shining and the beautiful landscape of the mountains in view, the parents and spectators were ready for another display from the Aspire Sporting Academy FC U16 Girls. The visitors displayed excellent football, with precision in passing and effective movement both on and off the ball. With the score level at 2-2 until the final moments, the visitors were anticipating to leave with a respectable score line.  However, in the final few minutes of the match, a direct free kick for the home side within dangerous territory allowed Atromitos to convert the opportunity and hit the back of the net.

The spirits were not dampened and the tour continued with a visit to the Heraion Lake and Isthmus Canal on day four. The group captured the picturesque views of the Greek landscape and enjoyed some relaxation by the lake before satisfying their appetites with lunch at the lake tavern.

To finish the week with a finale, the Aspire Sporting Academy FC U16 Girls received training sessions from a UEFA Pro Greek Football Coach and were put through their paces with some technical work and the application of their skills into a game setting.

The tour in Greece has been full of football action and the girls decided to finish the week with some Beach Volleyball!🏐👌🏻@Sportcamp_Group pic.twitter.com/y6Gmop1WDo

Football Sports Tour to Greece
Here is a selection of activities that Aspire Sporting Academy did on their sports tour to Greece:

Booking a Football Tour to Greece

We can help you plan an outstanding football tour. Get in touch and start planning your sports tour today – all our trips are bespoke and you can tailor itineraries to your curriculum needs and budget.