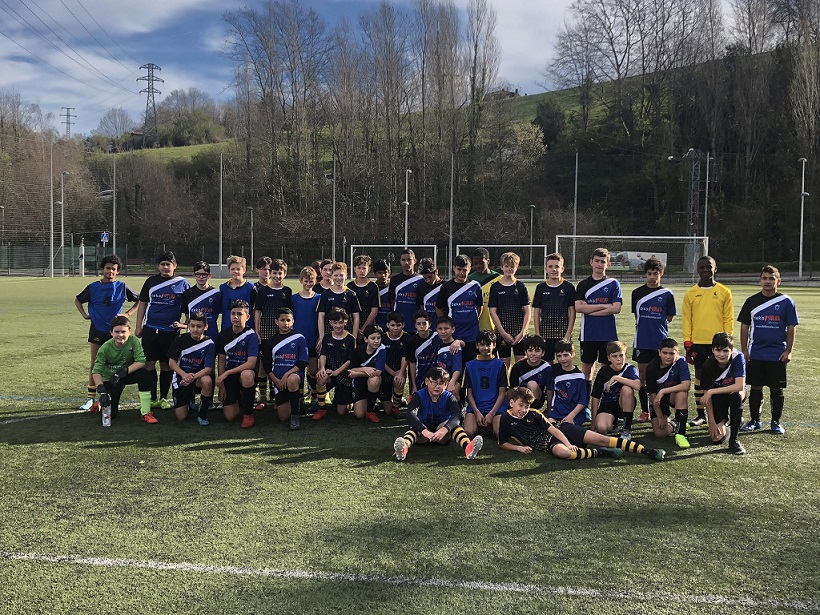 Colfe’s School were another school to head to our European base in the Basque Country this half term on their football tour to San Sebastian.

Taking the short flight across the English Channel, the Colfe’s football team ticked off two countries and played two football matches on their tour.

They also got the chance to watch a La Liga fixture and tour San Mames Stadium – Spain’s host stadium for Euro 2020.

In South France and North Spain, they got to experience the unique culture the Basque country has to offer.

Two football fixtures saw the Colfe’s School team play on either side of the Basque. In Spain, their first match on the third day of their trip saw them win 5-1 against C.D. Dunboa-Eguzki.

Two days later, across the border in France, the team couldn’t get the same result. It was back in Bayonne where they couldn’t overcome B2 Foot at the Stade Didier Deschamps.

Off the pitch, the boys soaked up some La Liga football atmosphere. Athletic Bilbao welcomed Osasuna to the San Mames Stadium, but the hosts didn’t find the net as they lost 1-0.

At the end of the trip, they got to go behind the scenes at the Athletic Club’s stadium. In the museum, there was the chance to learn about the history of the club while they had a players’ experience in the changing rooms, press room and tunnel.

Great final day of the trip in Bilbao for the @ColfesSchool Y8 football boys culminating in our tour of the @Athletic_en San Mames stadium. Now just the airport to navigate. pic.twitter.com/qTp8RbyDaD

Crossing the border into Spain, Colfe’s made their base in beautiful San Sebastian.

In their first full day on tour, it was time to experience Basque life. Pelota is the fastest ball sport in the world and Colfe’s School were put to their paces when trying out the traditional Basque sport.

Beaches are a beautiful part of the Basque and Ondaretta Beach provided the perfect location for the boys to relax after an active morning. It was into San Sebastian old town for dinner. On the menu was pintxos – Basque’s own tapas dish.

After a morning of training, the team enjoyed lunch on the lawns of Miramar Palace with views across La Concha Bay. Another Basque pastime is surfing and who can blame them with such a beautiful coastline? The Colfe’s boys gave it a go as they spent the afternoon at Zurriola Beach.

While in Bayonne, it would have been rude not to have visited one of the most famous French beaches in Biarritz. And, a little further down the coast they explored the small fishing town of St Jean de Luz.

They concluded their trip in Bilbao, exploring the old town and walking along the Nervion river to see the Guggenheim Museum.

We can help you plan an outstanding football tour. Get in touch and start planning your sports tour today – all our trips are bespoke and you can tailor itineraries to your curriculum needs and budget.