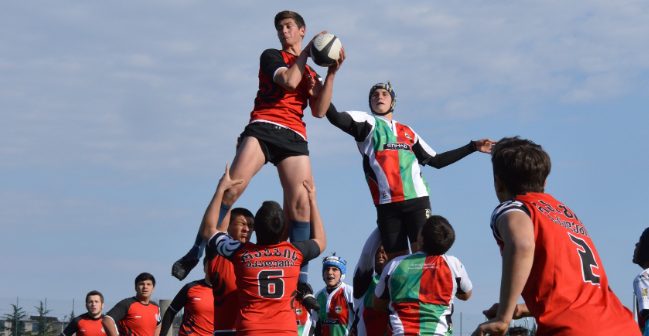 On the 23rd of March Katie a.k.a ‘The Commentator’ flew from London to Tbilisi to meet the Abu Dhabi Harlequins U15’s rugby team. After meeting the guide, Maka, for the week at the airport they waited in eager anticipation for the 59-strong group to touch down. Despite being 2am in the morning Katie and Maka found themselves greeted by the happy, smiling faces of the team and their families, all of which were eager to explore all that this beautiful and unique country had to offer.

After a short 30-minute transfer from the airport the group reached the Astoria Tbilisi Hotel and after a smooth check-in, it was time for some much-needed rest ahead of a busy day exploring the city. 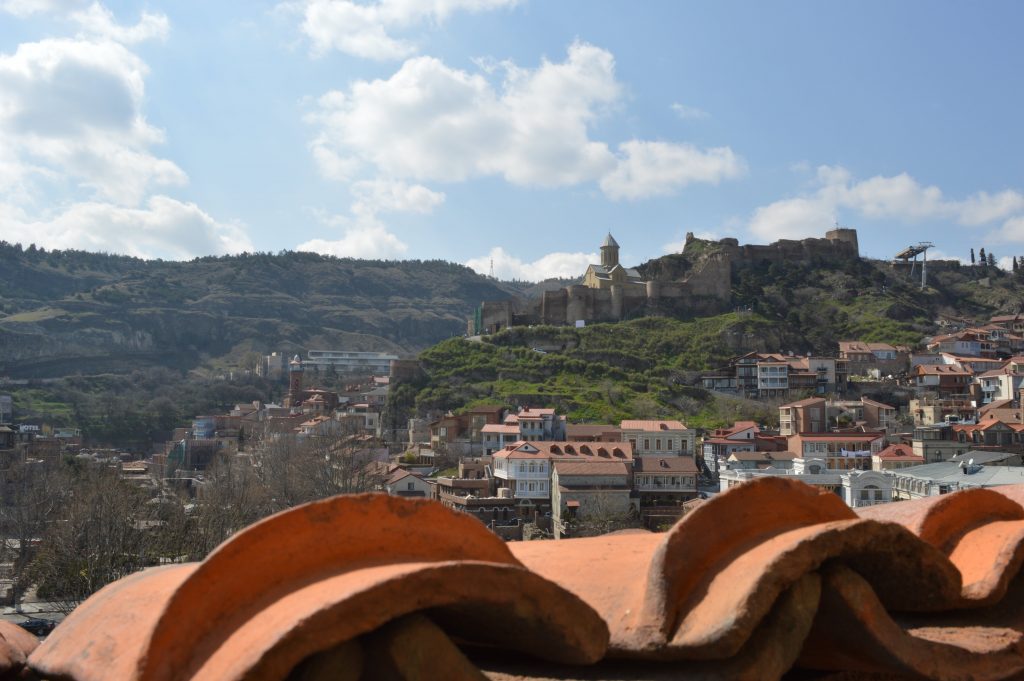 Lead by Maka the group saw the wonders of the old part of the city beginning with the Metekhi Church, a 13th Century building with spectacular views over the city. Next, it was time for a bite to eat before travelling up to the base of the Mother of Georgia, along with the ancient Narikala Fortress, both which offered the opportunity to experience panoramic views of the entire town by walking the descent back into the city. Returning to the hotel in the evening the group headed to a local restaurant for their first taste of traditional Georgian food. The tongue salad was an acquired taste to say the least but the Acharuli Khachapuri (cheese bread) went down a treat. The Harlequins were in high spirits on the evening of their first match of the tour.

The following day the group split into two groups; the parents and players and coaches. At 9am the parents headed out to visit the Svetitskhoveli Cathedral followed by a spot of wine tastings at two of the most desirable vineyards in Eastern Georgia. Katie, the team and coaches were invited down to Shevardeni- the national training ground for the Georgian U20’s squad- for a tour of the facilities and to watch the ‘Big 10’ league match that was taking place. The match displayed to the players just how serious rugby is taken in Georgia; a lifestyle for those who choose to play.

After some match inspiration, the team headed to Martkopi where the first challenge of the tour awaited verses the East Georgian Academy A Team. It’s safe to say that this team holds many national Georgian players of the future and with some dwarfing even the fathers of the tour, the Abu Dhabi Harlequins knew they had a challenge on their hands (as did Maka, the guide, who was torn between supporting the touring team who had been so welcoming and her national side!). After a hard 60-minute fight, the Georgians showed their pure strength and determination to win the game ending 65-7 to Georgia.

Following the match, both teams and all supporters headed to the Golden Cup, a restaurant that would become a favourite among the group. Despite a defeat, the Harlequins were in good spirit and all credit to the team, they didn’t let the loss get them down. The group were served a selection of traditional Georgian meats and dumplings, then unbeknown to anyone in the group a live band began, accompanied by dancers. It’s safe to say the atmosphere was electric with everyone having fun, singing and dancing along to some classic crowd favourites.

The next day is one that will be known as ‘the day of two countries.’ Setting off early in the morning the group took the two-hour bus journey to Udabno and the David Gareja Cave Complex. A stunning (but tough) 50-minute uphill climb lead the group to beautiful views out over Azerbaijan and as the group continued their accent, Maka taught them the history of the Monastery.

A two-hour journey lead the group back to Tbilisi (the quietest journey so far, apart from a few snores!) who were happy to find themselves back in the Golden Cup for another delicious evening meal, this time in a private room with live music and dancefloor to dance the night away.

March 27th gave the group some well-earned rest in the morning, with many of the adults enjoying the relaxing sulphur baths in the centre of Tbilisi and most players opting to say behind to enjoy the comfort of the hotel and a lie-in. After a bite to eat early afternoon the group headed to Shivardeni for their next match against the Georgian Academy B Team. Another strong 60 minutes of exciting rugby saw the Georgians come out on top with a large 70-0 score line. After presentations were made to the Georgian opposition and inspiring words were said from both coaches, the Harlequins left with their heads held high knowing they did all they could against players that no doubt in the future they would be seeing on their TV screens.

The next day the group made their way to Kutaisi, the second largest town in Georgia, to take in the culture of the West. On route, they stopped at the Prometheus Grotto (discovered just 33 years ago), a 2km walk through underground caves which gave the group a chance to see stunning stalactites, stalagmites, and petrified waterfalls. Following this, the group headed on to their hotel, the Tskaltubo Plaza where they settled into their rooms before making their way to a great buffet style dinner at the hotel. During dinner, little did they know MSG Tours had a little surprise up their sleeve… 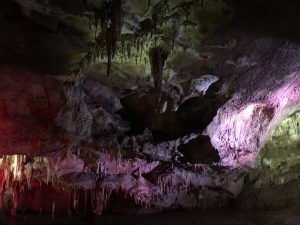 Whilst the group were chatting after food, in walked four members of the Georgian Folk Choir who wowed the group with an hour of tremendous harmonies, information on Georgian music tradition and other international influences on Georgian folk music. This, for many of the group, became their #MagicalMoment of the tour:

“Another massive highlight was the music, from the choirs we encountered in every monastery to the brilliant 4-piece male choir in the hotel. The music was spectacular.” Briana

A lovely buffet breakfast (the pancakes and delicious Georgian honey went down a treat) on the 29th provided the boys with fuel for the day. The players travelled to the Kutaisi High-Performance Centre where they were treated to a training session with four coaches from the Georgian RFU’s western division.

The session consisted of ball handling and communication drills and were run solely by the Georgian coaches, giving the Harlequins coaches a chance to talk tactics before their match that afternoon. During this time, the parents in the group took a trip to the 12th Century Gelati Cathedral, a UNESCO World Heritage Site!

It was then time for the third and final rugby match of the tour against Western Georgian, a match which proved to be much more competitive for the touring side, with the Harlequins gaining more possession, giving them the opportunity to display their flair and creativity on the pitch. A huge crowd filled the stadium showing just how much the Georgians love their rugby, at any level, and the final score stood at 24-7 to the Georgians.

The Abu Dhabi Harlequins made their way to the Gudauri Ski Resort to end their momentous trip with a few days’ skiing. On the way, they visited the breath taking Uplistikhe cave town- an interesting complex with dwelling quarters, wine cellars and even a theatre all caved into the rocks. Just 90 minutes from the complex the group reached the Gudauri Hut Hotel, which had beautiful panoramic views of the white slopes. This family run hotel was the hotel of the week with delicious food, fantastic customer service and a perfect location just 10 minutes’ walk from the lifts. 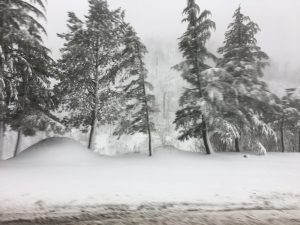 After a ski fit the evening before, the group woke to a delicious breakfast and hit the slopes for 2 hours of ski lessons by local instructors. With fresh powder, clear skies and good food from the slopes’ cafés, the group returned happy and keen to re-fuel some more

To end a fantastic and memorable tour, the group hosted their own awards evening in the multi-functional snooker room and bar in the hotel. Full of smiles and good food everyone was in high spirits and it was a fantastic way to celebrate the group’s achievements through the week.

Dominic, Abu Dhabi Harlequins Head Coach said: “A great rugby experience for our lads and the coaches! It was a privilege to play in such great facilities and against teams that were not only strong and fast, but had tremendous technical ability and organisation. It’s spurred us on to get even better and to work harder.”

Why not head to Georgia for your next Rugby tour? This dynamic country can offer you a high-standard of matches, excellent training conditions and a multitude of cultural excursions.

To find out more about rugby tours to Georgia click here. Alternatively, get in touch with a member of our dedicated team on 03333 111122 or submit a quick online enquiry form here.