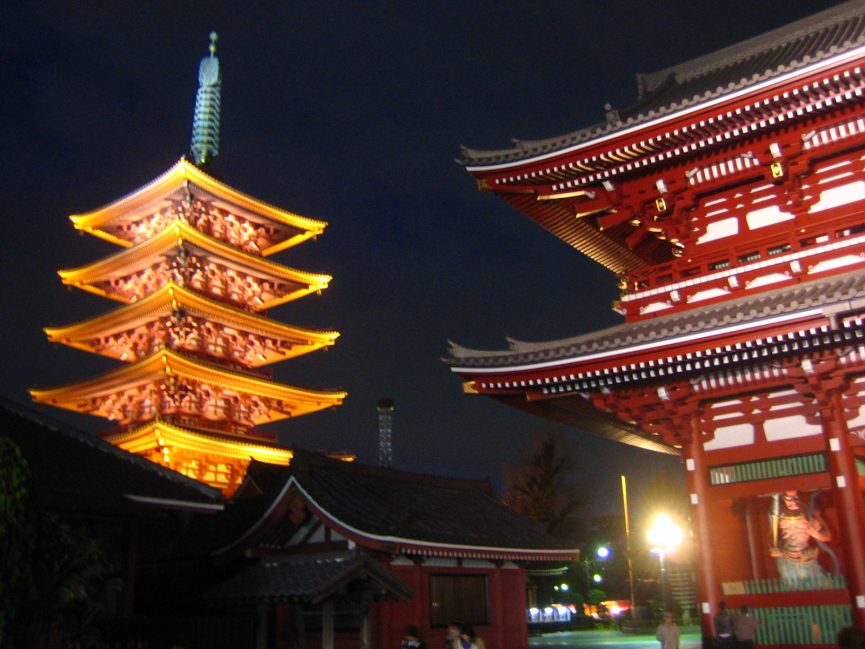 Travelling to Japan on a school ski trip is enough to make you sick of the sight of fresh, fluffy powder for at least 12 months.  Ease your grief at the lack of sore hips and knees with an overnight sightseeing tour of Tokyo prior to your return flight.

Nothing will prepare you for the sheer size, sounds and fluorescents of Tokyo until you exit the Subway at Shibuya, wander through fashionable Ginza or shop till you drop in Shinjuka. The sheer scale first hits you as you zoom in on the Shinkansen (bullet train) from Nagano, believing you’re in town only for a local to remind you that the area you believe is Tokyo is merely the feeder city of Omiya.

Gaze in disbelief at the endless skyscrapers both left and right of your carriage as the bullet train eventually grinds to a halt at Tokyo Station. Arriving by bus will simply not do. Tokyo works via an uber efficient network of JR Train, Metro, Subway and Shinkansen, working cohesively and to the second to whisk the 13 million inhabitants and tourists across their respective destinations in quick fire fashion. How it works is by craft, honed through a diligent obedience to navigating in crowded spaces. Despite the locals operating on auto-pilot on this transit system, Japanese people will always have time to pause and help you out should you be looking at your map with furrowed brow. With station signs and announcements also in English you’ll find your feet in no time and if you do miss a train fear not: another will be along within a very short space of time to take you from A to B and everywhere else through to Z.

Visiting Tokyo is an absolute on your school ski trip to Japan and, if you’re organised and up for a high – intensity bout of remarkable sightseeing, you can squeeze an awful lot in to your time in the city.

Assuming you’re arriving in the city after lunch via Shinkansen we’ve put together a sightseeing schedule to experience the very best of Tokyo’s sights, sounds and shopping.

1400: check in at your city hotel and drop bags in rooms. Don’t hang around as there’s too much to see!

1430: meet in hotel lobby with your JR Pass. For expediency we recommend that large groups use their teacher/student ratios to sightsee in smaller numbers. Exit your hotel into Shinagawa Station and make your way to Track 2 for the green Yamanote Line that loops the city continually.

1500: First up, Shinjuku, the area surrounding the largest terminal station in Tokyo and the busiest in the world with 3.5m users per day. Famed for its incredible shopping, you could spend hours browsing…but be disciplined as there’s time for that ahead. Instead, it’s over to the Tokyo Metropolitan Government Buildings; two observation decks offering views of Tokyo…for free!

1630: OK, time to let loose on the shopping but on condition that you practice your rehearsed Japanese and enjoy dinner on the go from one of the hundreds of vendors and restaurants based in this area. A cultural delight awaits in the evening as we remain in Shinjuka for entertainment at the Robot Restaurant. The flamboyant shows featuring robots and dancers are held 4 times per day and extremely unique to Japan.

2100h. It’s been a long day so head back to your hotel on the Yamanote Line, pausing in Shinagawa to sample the hustle and bustle before bed.

Loving the sightseeing that the old #japan has to offer here in #kyoto. Such a contrast to the big cities such as Tokyo and Osaka.

0730: breakfast in your hotel. Fill up your water bottles and pack a little chocolate as you’ll need energy for today’s adventures. Check out of rooms and drop your cases with the hotel receptionists who’ll provide a ticket receipt in exchange.

0830: back to Shinagawa Station for northbound journey towards Tokyo Station, alighting at Daimon Station. Head downstairs to Ueno Line on the Subway and purchase a single ticket for Tsukijishijo – ¥170 (3 stops). Coins or notes accepted with change provided by machine. Exit station and turn left; entrance to Tsukiji Market is 20m ahead and manned by a very helpful gentleman who will provide an A4 map of the Market. This active market is the busiest in Asia and thus it’s lively with all forms of packing and stacking. Browse the markets for souvenirs and trinkets and be sure to try the incredible sushi served straight from the marketplace. Head across to the inside market and view the traders with fish and sea stocks plying their trade.

1030: Walk downstairs to retrace steps to Daimon Station (¥170). Head up to platform and continue north to Ueno station. Alight and cross the road into Ueno Park where you’ll join the thousands of others enjoying the Cherry Blossoms, Tokyo Zoo, Metropolitan Museum and temples located within the Park. Look out for volunteer guides who are on hand to enhance your experience of the Park and assist with translation.

1230: Lunch. By now you’ll have realised that cooking at home isn’t really the done thing in Tokyo. The thousands of restaurants, cafes and food stalls offer a full range of traditional and Western dishes and await your order. Don’t stop too long as there’s still plenty to see!

Never ask a Japanese chef what he’s created. Simply bow your head slightly at the outcome.

1330: Mt Fuji! Sadly it’s located a little too far away to visit in person. However, on a clear day the mountain is visible from the Tokyo Skytree – the world’s highest free standing broadcast tower at 633m. It boasts its own station on the Ginza Line for convenience with two viewing platforms subject to your budget (and head for heights). We’ve allowed a few hours to enjoy the magnificent views and obligatory photos.

1530: Head back to the Yanamote Line for Shibuya, one of Tokyo’s three main hubs. The pace outside the station is furious and absorbing the huge crossing itself is an experience. This is your last full hour to soak up Tokyo’s incredible sights and sounds prior to your journey back to your hotel.

1700: With a 10pm flight you’ll need to squeeze dinner in at some point. Choose between an end of trip feast at the hotel or something fresh and tasty from the Shinagawa restaurant scene.

1830: That’s it, folks! Admittedly a tiny percentage of this magnificent city yet enough to startle and surprise the senses. You’ll have to come back the next year to see another round of highlights.

School ski trips to Japan
Enquire with us